Continuum Center is an educational corporation organized to explore the nature of consciousness, human capacity, and the interconnectedness of life, for personal, professional and planetary transformation.

Join with us in the exploration of the many dimensions of human brain/mind capacity.“Major problems cannot be solved with the same consciousness that created them.” Albert Einstein

Continuum Center has a range of programs, products and services to help individuals and organizations better understand and operationalize this needed shift in consciousness. We bring forward many forms of evidence that concepts like infinity, consciousness as primary, and a more-than-3-dimensional universe, have very 3-dimensional impact.  Our major “major problems” today are a logical outgrowth of inadequate operating assumptions.  We aim to demonstrate the everyday all-purpose implications of consciousness research in the quantum paradigm.  We need a new paradigm.

Fortunately we have one ready to go. 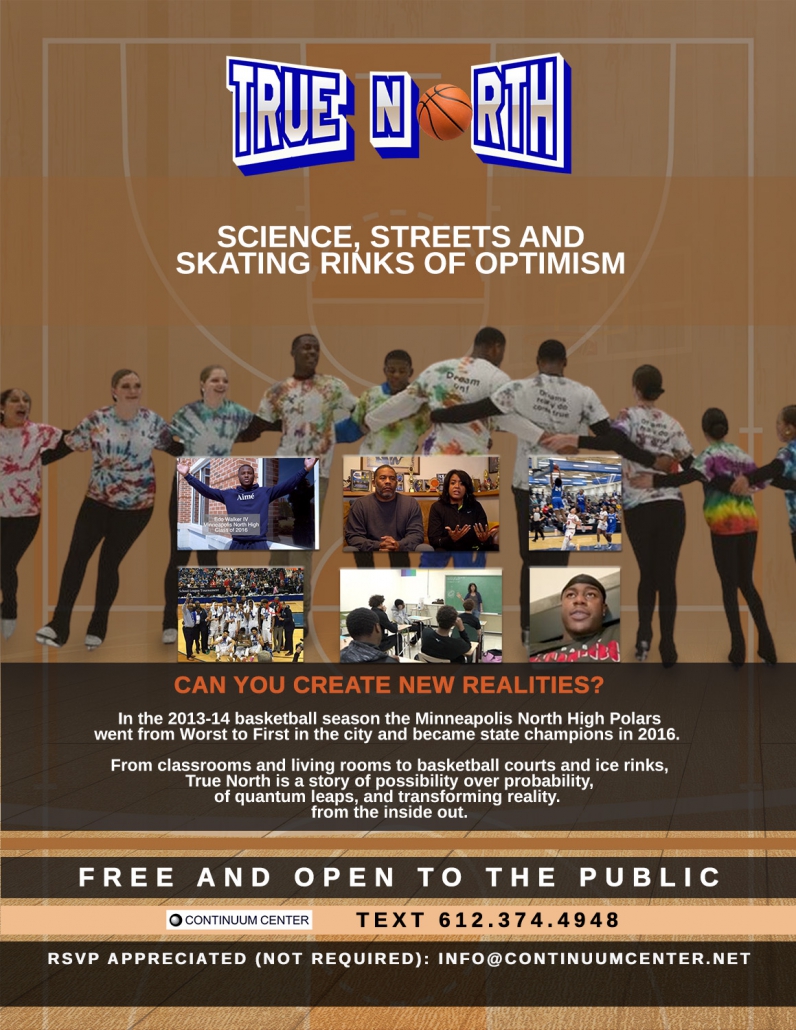 9 min preview from first half

Over the course of 8 years, the film follows the Mpls North High Polars from worst in the city to State champions (with a 95% grad rate) and beyond; featuring life lessons and unexpected developments that entertain and inspire! See the behind the scenes stories of a focus and mindset journey that helped change a team and a school.

“This is an important film to show how the young men matured over the years and that from the start you could see their attention span change while listening to Ms Jane talking about quantum physics and the different ways we can change our mindset and emotional energy to influence outcomes. I then paid attention on how they went from worst to winners in athletics and academics – and even in a skating show! Continuum Center is needed in our schools and communities and maybe it could help our parents parent to get our youth back on track with life issues.” Kriss Burrell – Academic Dean, Mpls North High School

LEADERSHIP: What philosophers say about the science of true leadership.

“Human Capacity” is focus of exhibit

A discussion on racism: an inside-out response (12 mins):  2021  Featuring three Discovery of Self alumni, Jordan Poeell Karis who led the construction and installation of the 12′ fist a the George Floyd memorial site, business owner James Scott who went through DoS 25 years earlier, and Rudy Tahir, a junior at MN Prep Academy.

William Arntz sold his successful software company and invested in what became a runaway global film sensation, What the Bleep do we Know?! a docu-drama hybrid on consciousness, quantum physics, addiction, and creating your own reality.   Also featuring Craig Rice (award-winning film-maker and past-president of MN Film and Television Board), Babette Apland (at the time VP of Behavioral Health at Health Partners). Long time educator and past Principal, Jerry Sparby, also appears in some segments. Filmed at Continuum Center.

In the summer of 2020, the Mindsetters program evolved out of Athleadership, training young adults to become public speakers about the transformative concepts and strategies of Discovery of Self that they have been studying and discussing while dealing with the challenges surrounding them. Mindsetters – Voices from North Mpls: (Video by Ralph Crowder III)

(Our right hemisphere has more connection to our animal/emotional brain than does the left brain hemisphere.)

In Discovery of Self we focus on healthy development of four particular regions: the reptilian and animal/emotional brains, right hemisphere, and frontal lobe.

See our directory of “backpage” research compilations and reports

Please text us for more information about workshops, presentations, and with any questions or comments: 612-374-4948 or info@continuumcenter.net