The Continuum Exhibit opened at the California (LA) Museum of Science and Industry in April 1978. Its stay was twice extended and broke attendance records; over 2 million visitors in less than a year.

We need an expanded understanding of both human consciousness and the universe.

Minnesota philanthropist, Hugh Harrison, bought rights to the  exhibit from co-creators Catherine Dees and Kay Croissant and brought a $250,000 version to Minneapolis where, among other locations, it was on display at the top of the IDS Center.  On its way to MN, it was on display at Boston City Hall where it was sponsored by an organization, Temple of Understanding, whose founders include Eleanor Roosevelt, the Dalai Lama, and Pope XXIII. 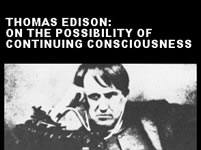 Edison was convinced that a mechanism could be developed, so sensitive that it could be affected by consciousness existing on levels of less density than ours.   In October, 1920, Edison gave interviews to SCIENTIFIC AMERICAN and AMERICAN magazines.  He said: “I have been thinking for some time of a machine or apparatus which could be operated by personalities which have passed onto another existence or sphere…

40 years later there is so much more research to validate and expand upon the evidence presented in the original exhibit about the continuity and interconnectedness of life. In partnership with Jones-Harrison, the first nursing home in Minnesota, we are recreating the original exhibit in retro fashion and including updates to be put on tour late-2019.

We are seeking sponsors and partners to bring a new and improved edition of Continuum to life. Contact us info@continuumcenter.net

“For 1000’s of years, from Egypt to Einstein, humans have sought to understand the universe and the relationship of human consciousness to it”  From the original Continuum Exhibit

“We perceive 3 Dimensions of space. So far science accepts 4 dimensions. It is probable that there are more.” William Tiller, 1978, From the original Continuum Exhibit.

“Continuum pours together in one time and place the joyful waterfall discovery of our forever-life beyond times and places. What a curious feeling, after a plunge through its rainbows, to look back and find that we’ve known them all along.” Richard Bach, author of Jonathan Livingston Seagull, From the original Continuum Exhibit.